Gravel bikes are bikes made for the road less traveled. Also known as adventure bikes, these rides can tackle a variety of surfaces, carry more gear, and let the rider go all day on harder terrain. The name makes it seem like this type of bike is only suited for looser, harder-to-navigate terrain, and it’s certainly great for that! However, gravel bikes are non-competitive models made for adventure and fun. Here’s what sets them apart!

What Makes A Gravel Bike Different From Other Bikes? 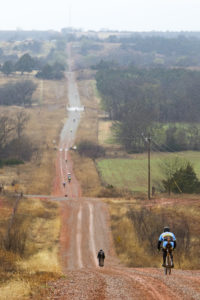 On its face, the gravel bike sounds like other, similar types like the road or cyclocross bikes. This makes sense because the gravel bike is kind of like a combination of these styles! It’s heavier than your standard road ride, allowing the bike to withstand the wear and tear of trail and gravel riding. Gravel bikes are also better for long trips and touring, as the rider can attach bags and racks to the frame without worrying about what the extra weight does to the material. The longer wheelbase also spreads this added weight over a longer footprint.

How the rider sits on a gravel bike is different from road, cyclocross, and mountain bikes, too. Unlike road bikes, which put the rider at a lower position for more aerodynamics, gravel bikes have a longer wheelbase and a taller headtube. This lets the rider sit at a more upright and relaxed position and gives them more stability when handling loose terrain.

But unlike a mountain bike, the gravel bike makes pedalling efficiency a priority. This is because the gravel bike rider is going to roll over the terrain they’re pointing at rather than quick maneuverability. Mountain bikes can handle radical changes in terrain, whereas gravel bikes are more for comfort and efficiency.

Gravel bike tires have more tread on them than road bikes. To get this extra traction, the standard gravel bike has 30 to 40mm tires with about 40 PSI. Compare this to the tires of road bikes, which are 23 to 25mm and have 90 – 100 PSI.

Why such a low PSI? The PSI is paired with the higher volume tire to absorb more of the bumps on a trail. This makes for a more efficient, comfortable, and puncture-resistant ride on a long gravel course.

Gravel Bikes Use Disc Brakes And A Certain Suspension 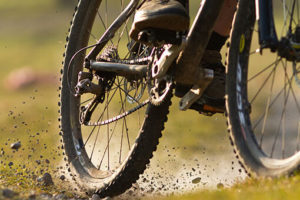 Due to the tire size, gravel bikes almost always use disc brakes. Traditional rim brakes aren’t large enough to get the clearance needed to stop the bike, but disc brakes can bring the bike to a stop. They also work better in a variety of conditions, making them more reliable on muddy, dusty, or wet terrain.

The suspension fork is also important. This reduces the impact of the road on the body, adds traction, and helps the rider control the wheels to hold their path despite the terrain. The suspension forks on gravel bikes typically have no more than 50 mm of “travel” (how much the fork can compress). Modern mountain bikes rarely have less than 100 mm of travel, making them suited for more rugged terrain.

While the name makes it sound like the gravel bike can only handle a certain kind of terrain, think about its other name: the adventure bike. “Adventure bikes” are in their element on unkempt roads and beaten trails, as well as over long distances. The gravel bike is also the perfect style for mountain cyclists getting back on the road and road cyclists looking to make the move to rougher terrain!